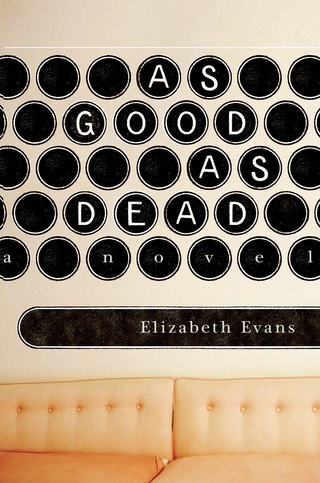 As Good As Dead

At the highly competitive Iowa Writers’ Workshop, small-town Charlotte is thrilled and confounded by charismatic and sophisticated Esmé. One moment Esmé is Charlotte’s best friend; the next, Esmé shuns her. After a tumultuous weekend, Charlotte’s insecurities and her resentment toward Esmé’s bewildering behavior reach a fever pitch. Charlotte betrays Esmé, unwittingly unleashing a cascade of future calamities.

Twenty years later, Charlotte is a successful novelist, enjoying a quiet life with her beloved husband. When a much-changed Esmé shows up on her doorstep, Charlotte must revisit the past she grieved over, and believed buried. Though Charlotte yearns to redeem the old friendship and her transgression, she is wary, and rightly so. Esmé makes no mention of Charlotte’s old betrayal, but her dinner invitation leads to a “request” that forces Charlotte to make an agonizing decision.

As Good As Dead performs an exquisitely tuned psychological high-wire act as it explores the dangers that lie in wait when trust is poisoned by secrets and fears.

Selected Praise
“Evans is a masterful storyteller. Simultaneously funny, menacing, and wise, As Good As Dead is her finest novel to date. Charlotte, the fearless and loveably flawed narrator, will find a permanent place in American literature.” —Bharati Mukherjee, author of Miss New India

“Evans writes with the mesmerizing art of Scheherazade during her one thousand and one nights.” —Robb Forman Dew, author of Being Polite to Hitler

“A compulsively page-turning novel. Blackmail! Back-stabbing! You will be as good as sleepless until you turn the last page.” —Julie Schumacher, author of Dear Committee Members

“With crystalline detail, Evans draws obsessive and seductive characters that make a passel of trouble for themselves—and for each other…Simply superb.” —Ann Cummins, author of Yellowcake

“As Good As Dead is as funny as it is sad, and gets to the heart of what reading is for—to change us and make us try harder at life. Elizabeth Evans is a true storyteller with a gorgeous and startling gift.” —Kate Bernheimer, author of How a Mother Weaned Her Girl from Fairy Tales

“Elizabeth Evans is a graceful and intelligent writer who never makes a false step, as well as a first-rate explorer of secrets and secret lives.” —Jean Thompson, author of The Humanity

“Evans expertly captures the psychology of females who were both friends and rivals on every level, from writing to men. A suspenseful atmosphere and insightful writing are at the heart of this well-crafted novel.” —Booklist

“This intelligent and literary psychological novel from Evans creatively explores what happens when secrets, betrayal, and trust issues arise in a friendship and in a marriage.” —Library Journal

The fateful morning—no exaggeration, fateful—that my long-lost friend, Esmé Cole, showed up on our front steps, I was sitting at the desk in the room that I used for a home office. My chair, I remember, made an uneasy perch, all slippery and lopsided because I hadn’t bothered to remove the items that I’d dumped on the seat the night before: a manila folder crammed with information about a job applicant being considered by the English Department; a puke-green envelope holding an entry for a book prize I’d reluctantly agreed to judge; and, then, a three-ring binder of my own writing that creaked whenever I shifted in the chair.

The sky in the window over my desk was a clear blue that morning. The temperature outside would climb into the high eighties as the day progressed, but the room faced north and its exterior wall still held the cold that settled in on desert nights—this was October in Tucson, Arizona—which meant that the ancient space heater at the level of my feet pinged away, giving off a metallic odor that might have been unpleasant to somebody else (I connected it with writing and comfort, and so I liked it).

Esmé Cole Fletcher, I should call my long-lost friend. Esmé Cole—betrayed by me twenty years before—did take the name of the man she married. Once upon a time, she and I had vowed to keep our own names forever, but this is a tale about nothing if

At the moment that Esmé rang the doorbell, I was not at work on either my own writing or that of my students. I was looking out that window over my desk. From there, I had a view of our backyard’s Sonoran Desert natives (creosote bush, barrel cactus, cholla), the very tips of the highest of the Tucson Mountains, and—along the western edge of the yard—the fifteen-foot-high hedge of red-flowered oleanders that I had planted from one-gallon pots eleven years before to give our then-new yard some color and shade. Earlier in the morning, I’d set a plate of canned tuna beneath the oleanders in hope of feeding a black cat—a definite hitch in its step—that had skulked past the sliding glass doors of the dining room, where my husband and I sat, eating breakfast. “Could that be Bad Cat?” I had asked—speaking almost to myself, I suppose. At any rate, Will had not looked up from the Times to offer an opinion. The cat—whether it was the cat we called Bad Cat or not—looked pitiful, all skin and bones, its black fur matted and also covered with odd patches of pale fluff, as if somebody had poked it around under a bed to sweep up dust bunnies. When I got up from the table and walked toward the door to peek out, Will had set down his paper. In the deep and resonant voice that had mesmerized me from the start, he’d said, “Don’t you start feeding that cat, Charlotte.” As if the thought hadn’t entered my mind, I’d rolled my eyes. Nevertheless, after he headed off to the university—a brilliant art historian, Will, really, so good his lectures could bring tears to my eyes—I had trotted out back in my bathrobe with a can opener and a can of tuna and a plate, just in case the scrawny cat came around again.

I remember this day, and the days that followed, in the precise manner that we remember those bolt-bright days after we’ve learned that someone we love has died or a national tragedy has occurred (Where were you when the Twin Towers fell?).

When Esmé rang our front doorbell that morning—an obnoxious thing, doordrill was more like it—I jumped in my desk chair. Swore. Telephones ringing, doorbells drilling—I always preferred to let Will answer. He was better at handling that sort of thing, and who could be at the door at eleven-something in the morning, anyway? Our house sat in an older part of Tucson that, although encircled by neighborhoods with conventional sidewalks and lawns and paved streets, remained staunchly gravel roads, home to coyotes, Gambel’s quail, and even the occasional long-tusked javelina. Apart from friends in a formal mood on nights when they brought flowers or wine for a dinner party, the only people who used our front door were UPS drivers, evangelists, and those poor teenage boys lugging around Styrofoam coolers of candy whose profits, each sweating kid swore, by rote, would keep him off the streets and away from a life of drugs and crime.

Still, I got up from my desk.

Will liked the living room drapes closed. I preferred them open but was less consistent about carrying out my wishes, which was a boon that morning, since it allowed me to peek out at the caller from a slit between the panels.

A stout, red-faced woman stood on our front steps. Boxy, olive pantsuit. Cropped hair the color of Vaseline. Partly turned away, she was just a profile with a single eye squinting against the Arizona sunshine. Impossible for me to have guessed that this was the Esmé Cole who had been a student with me back at the Iowa Writers’ Workshop in 1988, my roommate in a brick apartment house on Burlington Street. That Esmé Cole had been stylish and slim in retro capris, vintage cashmere cardigans; a lovely twenty-five-year-old with a bushel basket of red hair pinned up in a cloud of glorious dishevelment (brave, I’d thought, wearing your hair that way, like keeping a swan for a pet and walking the thing around town, an announcement that you knew you were fabulous).

Could the woman on the front steps be a Jehovah’s Witness, panting to hand over a copy of the Watchtower? But didn’t Witnesses travel in pairs, and didn’t the women wear dresses?

I definitely did not want to open the door. But I worried over that Pepto-Bismol pink face. And those blocky hands, hanging so inert and glossy and red they could have been shrink-wrapped packs of hamburger. Suppose the woman was one of the poor souls discombobulated by our quiet neighborhood’s gravel roads that looked like driveways and driveways that looked like roads; she’d hoped to get in a walk this morning but now, on the point of heatstroke, had resigned herself to asking for directions and a glass of water. Suppose she was looking for a lost pet or, worse, a lost child who’d wandered off into this semiwilderness of cacti, rattlesnakes, the occasional grandfathered-in swimming pool with no proper safety fence around it.

Two years before, I had been irked when a Poets & Writers profile described me as looking “like a Sunday school teacher.” A Sunday school teacher! Since adolescence, I’d done war with the same fifteen pounds, but I’d been on the winning side at the time of the profile and aimed for an edgy, rock-and-roll aura (hair very blond and shaggy, eyes rimmed with black kohl à la Kim Gordon). When Will tried to cheer me by noting that the profile said I looked young for thirty-nine, I’d responded, “Whatever” (decidedly sour). For what it’s worth, shortly after the P & W piece appeared, I rode several stories in a Manhattan elevator with Gordon and wouldn’t have known it was she had my agent not told me so after we stepped out of the car.

The bulky Esmé Cole Fletcher who stood on Will’s and my front steps—she looked so different from the Esmé whom I remembered that even after I had opened the inner door and she said her name through the screen, I needed her teasing reprimand, “Charlotte, c’est moi,” before a current began to flow between us. Weak at first. Then that dull, chunky lady began to acquire a soft glow, and it was Esmé, and joy is what I felt, alongside a dread that must have made my face go white.

Yes, in the fall of 1988, there had been lovely times between my Workshop friend and myself, such as a fall morning when, side by side, we knelt on the linoleum of our Burlington Street kitchen and, dent by dent, using the nails of our little fingers, pressed our names—Charlotte, Esmé—into the many coats of built-up, yellowed enamel on the kitchen cupboards. Even better, once we finished, Esmé added a plus sign between our names. Esmé + Charlotte. As if we were sweethearts.

Also true: At the end of that year’s Thanksgiving vacation, I had spent an idiotic, blotto evening sloshing around on the chilly water bed of Esmé’s Workshop boyfriend, an Alabamian named Jeremy Fletcher, whom I’d generally regarded as a giant blowhard.

The worst thing I ever did in my entire life: betraying not only my friend but also Will, off in Italy at the time.

A thoroughly ridiculous person. That was what I’d been.

For a list of questions to enhance your group's discussion of As Good As Dead, please visit Bloomsbury's page here and scroll down; you can also download the questions as a PDF.