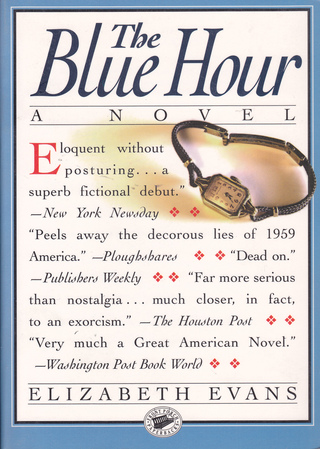 What is "The Blue Hour"? It's when Father doesn't Know Best, it's the morning after "Queen for a Day," it's when the center cannot hold for a 1950s "nuclear family" in Meander, Illinois. It's 1959, as America gets ready to say good-bye to Mamie Eisenhower and hello to Jackie Kennedy. For ten-year-old Penny Powell, it's the hour after sunset, and 1959 is the year she takes on the job of family barometer, absorbing for later reflection every rise and dip in the homefront weather. And the weather is bumpy, for 1959 is the year her parents, Bob and Dotty, buy a house that matches Bob's ambitions—if not his pocketbook—and Dotty reinvents herself to keep up with the Joneses. Penny watches as her father loses yet another "fortune," as her mother is lured into a dangerously seductive social circle, as her older sister heads for amphetamine addiction, anorexia, and the wrong crowd. It's a risky, nervous time for the little mood manager who feels responsible for keeping the family peace. But what can she do when her father feels entitled to lord it over her mother with those not-so-subtle hints about Dotty's body (not to mention her brain)? Grown up, Penny will remember everything about the year that was so tightly wound around her father's hard-driving ambition and bad judgment that it all broke loose and spun out of control. She'll remember it so well that she'll finally figure out what really did happen, what Penny's mother was doing behind all of their backs—probably even her own.

The Blue Hour is a stunning debut that shines the soft light of dusk on a 1950s family's metamorphosis from innocuous and innocent into something quite different—and quite tragic.

"The Blue Hour is about the marketing and consumption of values and is very much a Great American Novel…one of those rare novels one finishes with the sense of having needed to read it."

—Washington Post Book World
"The Blue Hour is about an America we all remember, the pain we all wish to deny, and the exquisite, expensive habit of familial love. Elizabeth Evans recalls the intimate negotiations of family with such care and intricacy that one feels anew the wonder and the terror of being a child and having parents."
—Robert Boswell, author of Tumbledown

...Later that night, I woke to the sound of the trains and the rush and the bang of the flooding creek. The light in my room seemed odd, of a different order—silver, metallic, like the glow-in-the-dark waves on my Noah's ark wallpaper. I closed my eyes against that light and whatever it meant to reveal. I knew, however, that I felt guilty—I thought it had something to do with sneaking into Chan Bishop's house, but the idea of dancing in the kitchen kept coming into my head, too, all the laughing and smiling and dancing.

God, I promised, I will never again drink beer, and then I said "The Lord's Prayer," "The Nicene Creed," "The Apostles' Creed," not once each, but several times. Then I imagined the things we would need to take with us into our bomb shelter. I mentally constructed shelves for the cistern and stocked them deep with cheering cans of fruits and vegetables and Boston Brown Bread. I'd never tasted Boston Brown Bread, but always believed it would be fortifying and sweet. Corn, shoe-string potatoes, pork and beans, corned beef. Peaches. My father liked canned peaches. His family rarely had fruit when he was a boy, and he still considered canned peaches a treat.

"Penny?" Slowly, my mother opened my bedroom door. "Are you awake?" she whispered.

Without my glasses on, I saw her as a moth-like creature in her long, blue nightgown. "I couldn't sleep," she said, but she sounded pleased, excited. "It's this crazy light. Did you notice the light? Come over here. It's the flood."

I put on my glasses, and crossed to her, looked out at the glen. It was molten, and I needed a moment to understand what had happened: the flooding creek had split in two and now rushed over both the dam and the grass, leaving the hulk of the old mill a gray eye in a silver needle.

I smiled up at my mother to show my appreciation of the moment, of her waking me. She laid her arm across my shoulders and gave me a little hug. A perfect moment. I wanted to fix it, have the flood stay, running so wild, to have that amazement remain. Her cheek on top of my head, she whispered, "You and I are alike, aren't we? We understand each other, right?"

I smiled at her as if her question pleased me. Earlier, when she and Chan and I had been dancing in the kitchen, I'd felt proud of her, and myself, too. But I knew other moments in our lives, and as we stood there in the moonlight, our moment of camaraderie began to weigh upon me. I felt the way I suppose a person feels when the drowning victim he means to rescue begins to thrash about, drag him down. I wanted to cut loose from her. But, really, had she truly been drowning—to prevent my mother from knowing that what I wanted most of all was to save myself—well, I would have been willing to go down, too.

An Interview with the Author