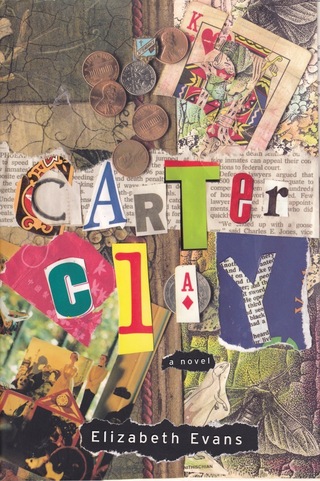 This is before the accident. No one is dead yet. Blood circulates just as it should, two ounces per pump of the heart.

So begins the extraordinary story of Carter Clay, a Vietnam veteran at loose ends. Drunk and driving a van down a Florida highway, Clay smashes into the Alitz family: Joe and Katherine, distinguished paleontologists, and their daughter, Jersey. Joe is killed; Katherine and Jersey are seriously injured. In an attempt to redeem himself while still concealing his culpability, Clay becomes a questionable caretaker of Katherine and Jersey's damaged lives. He obtains a job as an aide at the hospital where Katherine and Jersey initially receive care. When Katherine's retired mother assumes reluctant responsibility for the pair, Clay further insinuates himself into their lives—imposing upon precocious Jersey and addled Katherine the baggage of his past and his haphazard faith in God.

Suspenseful, psychologically complex, and inhabited by characters that will haunt your memory long after you have turned the last page, Carter Clay is a magnificent novel—a finely wrought tale of the frailty of identity and the possibility of redemption.

"One of the Best Books of the Year."
–Los Angeles Times Book Review
"Carter Clay demonstrates with awful clarity the unintended consequences of good intentions....It shows a novelist working her way into the literary stratosphere."
–Newsday
"While many novelists emulate Feodor Dostoevski, Elizabeth Evans actually approaches his brilliance in Carter Clay, a tense, psychological page-turner that resonates on many levels."
–Minneapolis Star-Tribune
"Brave and fascinating."
–Chicago Tribune
"A book that offers no particularly happy endings and no easy answers to difficult questions of guilt and the possibility of forgiveness. Highly recommended for all fiction collections."
–Library Journal
"Carter Clay is thrilling in its enormous ambition and intelligence. Elizabeth Evans is a fearless writer. After reading this novel, I’m convinced that there’s nothing that she can’t do."
–Ann Patchett, author of State of Wonder
"Beautiful, mysterious, and superbly written, Carter Clay is an enthralling and profound meditation on the accidents of fate that can often cause life to slip beyond our control."
–Oscar Hijuelos, author of The Mambo Kings
"Once in a great while, a writer is able to evoke the true enigmatic complexity of redemption. Elizabeth Evans’s novel not only offers us grace, but it does so in exquisite and heartrending prose."
–Jill Ciment, author of Heroic Measures
"In this absorbing tale of sin, suffering, and redemption, at once poignant and grotesque, Elizabeth Evans has proved herself worthy—as few writers do—of comparison with Flannery O’Connor. But hers is the more generous vision, I think, and the more compassionate."
–Nancy Mairs, author of Ordinary Time

This is before the accident. No one is dead yet. Blood circulates just as it should, two ounces per pump of the heart. Watch the man who stands on this piece of Florida roadside. Watch for the scarcely visible tick in that vulnerable inch of neck just inside the open collar of his blue shirt. You know the location of that inch of neck—his neck, our necks—the spot to which hands might fly at an unexpected noise or tap on the shoulder.

The man is lost, and so he scowls a little as he stares out at the Florida grasslands and the grand steers that feed there. Aberdeen Angus. Beef cattle. Black. Hornless.

If you do not believe in accidents, if you hold everyone responsible for everything, then the events that follow will appear tidier but more hideous. God is let off the hook then, yes?—if, after all, God is to be allowed? Some sort of God? Perhaps responsible for no more than these props, this setting?

What a white, white ache of sky! Beneath it, the primary-green grasslands go to chartreuse as the man's view/our view contracts, and we move closer, closer still to the ditch at his feet. The ditch—a halvah swirl of sand and broken shells—has been quite recently ripped open by the yellow earth-moving equipment parked on its banks. Ancient monsters, dinosaurs; of course, that is what the pieces of equipment resemble, snouts down, as if the great beasts feed. But this is Florida, 1993. Any sediment on which a dinosaur might once have walked now lies buried thousands and thousands of feet beneath our man.

On his head, Joe wears a red canvas hat, its brim turned up like that on the hat of a sailor. The hat belongs to his widowed mother-in-law, Marybelle Milhause, a.k.a. "M.B.," who is the reason for Joe's trip to Florida. Taken together with Joe's shoulder-length hair and careful beard, M.B.'s red hat gives Joe a somewhat fantastical look. He might be the king of diamonds in the deck of cards that—just now, back at her pink stucco condominium—M.B. lays down in one of her perpetual games of Solitaire. Sip, sip, sip go the cards as M.B. pulls a trio from the pile in her hand, gives the top card a steely inspection through the enormous designer eye glasses that transform her otherwise human face into the mug of Jiminy Cricket.

How many miles is it to M.B.'s retirement condo from the roadside where Joe stands? Suppose Joe could calculate the distance. Would it help him find his way back?

No. Knowledge of distance is no substitute for direction. Uselessly, Joe scans the useless horizon, then glances to his left. There, just a few feet away, stand his adolescent daughter and wife—the latter, Katherine Milhause, Joe's former student, now a paleontologist in her own right. Mother and daughter share a pair of binoculars through which they study certain large birds that weave in and out between the feet of the Angus.

Earlier in the afternoon, after tuning the radio to this particular program, Katherine gave Joe a light punch in the shoulder and grinned. Back then, broccoli-green trees still pressed close to the road, and the rental car took the family past the occasional rickety tricks of wood and tar paper that certain Floridians had no choice but to call "home." Back then, Joe had not yet admitted that the family drove down the wrong road, and Katherine was laughing about the radio show, and saying, "One thing you have to admit about these shows, Joe; they may parade self-righteousness as humility, but at least they talk about things of consequence!" At the time, poor Joe was preoccupied with finding signs of their location, and did not point out that Katherine made much ado of covering her ears whenever M.B. listened to the very same program back at the pink condominium. Poor Joe did not know then—he will never know—that when he left Arles' Mineral Springs, he took the wrong turn. Yes, at the time that the poodle-faced clerk at Arles' Mineral Springs gave Joe directions, she was mentally reviewing the contents of the patio's vending machine—which chips should she buy on her break? —and so, with no malice intended, the clerk told Joe left when she should have said right.

To clarify Joe's appearance, let us add that as he stands on the Florida roadside his present worries make him appear a worn king of diamonds. A face card once stashed in a back pocket against an emergency, then forgotten, and sent through the washer, and the dryer, too.

Joe could have stopped a half an hour ago to ask directions at the occasional store or cafe they passed. He has known for at least that long that they travel the wrong road. But Joe is a man who prefers to solve his own problems.

Now, as he stands on the shoulder of the road—Post Road, its name, though Joe does not know this is the case—Joe wrests open a map purchased that morning at the Exxon station in Bradenton. The crack and explosion of crisp paper drive his wife and daughter back a step. A bright, bright yellow map. On certain panels it holds colorful graphs and drawings and photos: Ponce de Leon and the Fountain of Youth; sprays of orange blossoms; distances from here to there; portrait of the state's smiling governor who, due to the printer's poor color-processing, appears to have just quaffed a mug of clotted blood.

About This Book Cover

For the unusual story of Evans's contributions to the cover art for Carter Clay, please enjoy this Poets & Writers article, The Big Cover-Up: A Writer’s Role in Book Jacket Design.

A Reading from Carter Clay