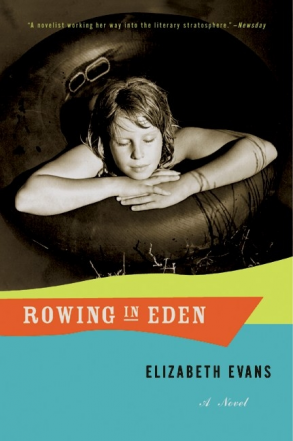 About This Book
Selected Praise
Excerpt

Lately, more and more, "cool" struck her as conjured, a thing that hurt the soul of both its practitioners and admirers. Franny wanted passion. Passion could hurt you, too, of course, but passion was not fake.

Pynch Lake is quiet nine months of the year but bursts into life each summer when the vacationers arrive. In the summer of 1965, year-round residents Harold and Peg Wahl find the world that once belonged to them is now being taken over by their older daughters, returned from college for the summer. Cool and self-possessed Rosamund is receiving the attention of the family friend who formerly courted Peg. Martie is filling the house with parties and houseguests of her own. No one in the family is paying much attention to the precocious thirteen-year-old Franny, who sets out to find a life of her own—and, in the process, turns the Wahl family upside down.

Written in rich, lyrical language, Rowing in Eden is a profound, haunting story about the promises and betrayals of love.

“Evans knows the language of teenage confusion well, and Franny's resiliency is appealing… Evans creates a textured portrait of one family's painful acclimation to changing sexual mores.”
—Publishers Weekly
“Evans has done a remarkable job in weaving a deeply colored and textured tapestry of images and emotions… The vividness of the setting makes the human drama all the more poignant… Evans has written an anthem for failed romantics.”
—Booklist
“Brings readers through a gamut of emotional experiences and leaves them wiser at the close.”
—Denver Post
Top

July. A queer, hazy day. Overhead, the sun made an odd white bulge in the pale, pale sky.

Like ice, thought Franny. Ice melting into a glass of milk. Or maybe a knee—eerie thought—maybe a knee or an elbow that poked out from a pool of concrete.

Staring out through the plate glass window that belonged to the showroom of the Pynch Marina (many shiny boats hunkering quietly at her back). Frances Jean, she was. Thirteen years old. Face set in a look both obstinate and dreamy.

Frances Jean Wahl thought about the summer sky, yes. Made up her strings of words to describe the sun in that sky, but other words ran in her head as well.

We don't do that, Franny. Those were the words she meant to shut out by playing with words of her own.

Outside the marina, Lakeside Drive ran bumper to bumper with irritable tourist traffic. This was Pynch Lake, a town of twenty thousand in the roughly rectangular state of Iowa. The noise from the traffic—coarse engine pops rising from a tangle of music and machinery on both the street and the lake—that noise poured through the marina's open door, and was overlaid by the sound of a radio playing in the back room.

"After late-breaking news, we'll return with Summer '65 Countdown," the announcer said in a voice that was as much a honk as the honks from the cars in the street, and, still, over all of this, Franny Wahl heard, We don't do that, Franny.

At the four-way stop, a pretty girl in a black swimsuit stood up from behind the wheel of her convertible and began to yell. The object of her fury: a man in a station wagon who had hoped to back his boat trailer into the lake via the ramp at the end of the parking lot that served both the marina and the Top Hat Club. Somehow, this man had gotten his trailer hung up on the curb in front of the Top Hat and now he blocked traffic for the entire intersection.

The driver of the station wagon—mouth working in his red, red face—climbed from his car. Something-something, the mellifluous newscaster said of the closure of the investigation into the misconduct of Senate employee Bobby Baker. As Franny's father often became agitated by such reports, the newscaster's words gave the girl the same sort of passing qualm she might have experienced had the marina's fluorescent lights flickered. Still, she did not actually listen to the report. She did not much care about news of the nation.

She did, however, pity the driver of the station wagon. A big man. A good six foot five, two hundred and fifty pounds. His shirt had come untucked in back as, vainly, he tried to lift the boat and its trailer over the curb and into the street.

Franny let her forehead tip against the cool glass of the showroom window. She closed her eyes. Because she felt sorry for the driver. And appalled by him. And even a little humiliated by his plight. Because he reminded her too much of her father. Still, the driver did not entirely distract her from the words:

She could not seem to stop herself from holding the words up for inspection, pouring them back and forth like a string of beads, a handful of pebbles. She—tasted them. Something a little chemical? Like copper? Like a penny held on her tongue?

The sound made her start. There, on the other side of the plate glass window, stood a family of tourists, laughing, looking in at Franny as one member of their group—a boy of six or seven, hair in duck feathers from a swim at the beach-lowered his fist from the glass. He scowled at Franny. "Wake up!" he shouted, the words damped but still definite through the heavy glass. Then his laughing father and mother set their hands on the boy's skinny shoulders and they moved him along toward the busy intersection.

The honking in the street subsided. The man in the station wagon had finally driven his trailer off the curb. Traffic began to move again and, from the marina sales counter, Franny could hear the laughter of her big sister Rosamund as Rosamund spoke to the marina clerk about buying life-jackets for the family speedboat.

At the Wahl house, earlier that morning, there had been talk of the life-jackets. "You kids and your guests think you're indestructible." So Franny's mother had said to Rosamund, and the sharpness in Peg Wahl's voice had let Franny know that the conversation involved more than life-jackets. Though no one had pointed out the change, that summer Franny saw that the river of parties and guests that had formerly carried her father and mother atop its dashing blue now had tossed the pair aside. And who did the lively current carry these days? Franny's big sisters, Rosamund and Martie, home from their universities until September.

As she talked to Rosamund, Peg Wahl had been at work on that evening's dinner. With her substantial, sun-tanned arms sunk to the elbows in chicken parts and barbecue sauce, and her hair not yet combed for the day, Peg looked very much the farmwife she might have become had she not met law student Brick some twenty years before. Franny knew, however, that her mother could still bring up a shine on her once much praised looks (even now, her high cheekbones, chocolate eyes, and white-toothed smile attracted comparisons to blond and bubbly Doris Day).

Peg kept her voice low as she spoke to Rosamund; a few of her daughters' houseguests still lingered in the dining room, helping themselves to scrambled eggs and sausages from the breakfront...